394 ° Festino di Santa Rosalia, Patron of the City of Palermo. U fistìnu 2018. Traditional historical procession, in a mix of folklore and religion that finds its culmination in traditional fireworks. An authentic treasure trove of traditions, the Festino di Santa Rosalia, the patron saint of Palermo, is an event that attracts tens of thousands of tourists to the city. It celebrates the liberation of the city from the plague of 1624, following the discovery of the relics of Santuzza on Monte Pellegrino. The first party was commissioned by cardinal Giannettino Doria in 1625, over the centuries the party has been able to renew itself while keeping all its charm and tradition unaltered. 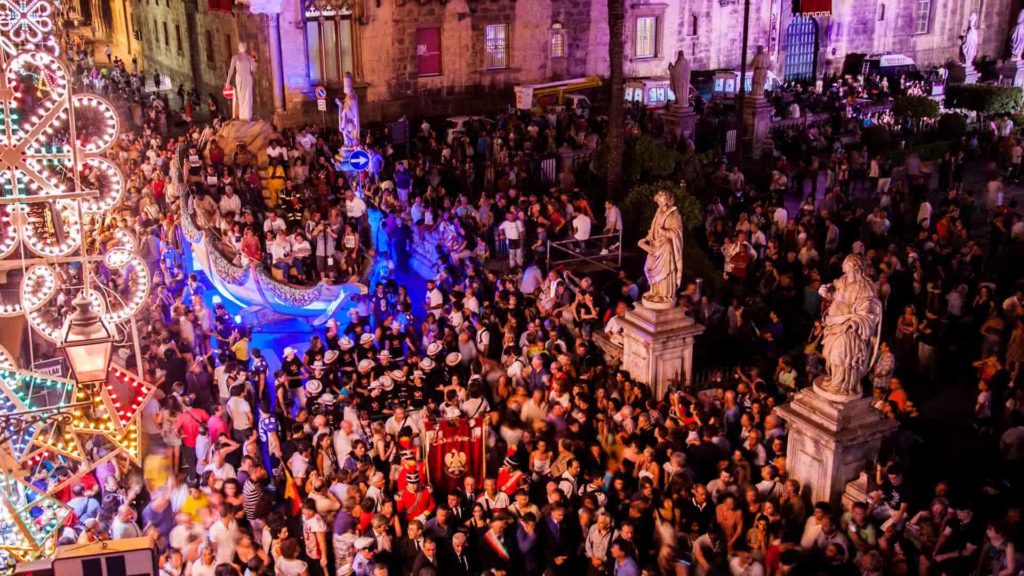 The night between July 14th and 15th, thousands of Palermitans will accompany the long march of the Santuzza Wagon, and will move from the Cathedral and to the Foro Italico, passing through Piazza Bologni, Quattro Canti and Porta Felice, door is the entrance from the side sea ​​at the Cassaro district. A mix of folklore and religion that finds its culmination in the traditional fireworks that illuminate the forum Umberto I up to the Cala.
Culinary traditions. During the celebrations are consumed dishes that are part of the popular tradition of Palermo: pasta with sardines (pasta sardini), babbaluci (snails boiled with garlic and parsley), sfincci (‘u sfinciuni), boiled octopus (‘ u purpu), calia e simenza (‘u scacciu), the boiled panicle (pullanca) and the Anguria (called’ u muluni).

Santa Rosalia or Rosalia Sinibaldi (1130-1156), according to tradition, belonged to the noble family of Sinibaldi and was a 12th-century Palermitan virgin, daughter of Sinibaldo, lord of Quisquina and Rose in the province of Agrigento, then Girgenti. He lived at the court of King Roger before retiring as a Hermit in a cave on Mount Pellegrino, where he died. In 1624 he saved the city from the plague and became its patron saint, ousting Santa Cristina, Santa Oliva, Santa Ninfa and Sant’Agata. According to legend, in fact, a hunter appeared in a dream indicating to him where he could find his remains, which when carried in procession in the city stopped the epidemic. The cult of the saint, however, is attested by documents from 1196 and was already widespread in the thirteenth century. It is the party that as the Villabianca writes “the people consider its own prerogative: time / sacred space of its talk with the Saint”.

U Fistinu, which begins on the 10th of July and lasts five days, has undergone changes over the centuries, today the first three days of the festival are a preparation for the great parade on the 14th which precedes the parade of the Triumphal Chariot. ends at the marina with the famous spectacle of fireworks. The party ends on the 15th with the solemn procession of the relics of the Saint, contained inside the silver Urn, between two wings of the crowd. In Santa Rosalia and his party, the Palermitans find a reason and an opportunity for collective identity well summarized in the cry Viva Palermo and Santa Rosalia.

THE YEAR OF THE PARTY
The party always starts with its creative work site. The Festino, as every year, will be a unique and unrepeatable creation, a unique event imagined right on the city, which in the city finds its big stage.

PALERMO AND THE PALERMITAN, A HOMAGE TO THE HOLY
Key moments, to strengthen the relationship between the city, its artists and the patron saint, will always be the dates that precede the night of July 14th. They will be the traditional shows, the music of the party, the stories of the saint to anticipate and give strength in its most classic tradition to the celebration of the city and its citizens. Thus, some districts symbol of this tradition, festively decorated with lights, will become stages of the Festino, in particular the Kalsa, Monte Pellegrino, and Monte di Pietà. The spectacular moments that will light up the Festino inside the city are different and articulated.

IL CORTEO: THE SOUL OF Festino Santa Rosalia Palermo 2018
Parades and fashion shows have always been, since 1625, topical moments of the Festino and their solemn, colorful and rich gait has always attracted large crowds of spectators. The Cassaro has turned into a great stage in which the drama of the spreading of the plague contagion and the great joy of liberation through the intervention of the Saint has been relived. Great shows of lights, colors and sounds that have remained in the memory of the Palermitans and tourists.

THE CARROW: A WORK OF CONTEMPORARY ART
The Triumphal Chariot represents the party, it is the soul of the Festino, it is the heart of the festivities. It is strongly symbolic, it is not only a scenic and allegorical apparatus, but a true contemporary work of an artist. One of the highlights of the party is the parade of the Triumphal Chariot throughout the ancient Cassaro. The Chariot dragged by the oxen has the shape of a vessel, with a stern architectural structure at the top of which a statue of Santa Rosalia is hoisted in the height of its glory. The Chariot along the way is accompanied by the sound of the musicians who find a place on it. The first wagon was built in 1686. Over the centuries it has undergone several evolutions, famous ones designed by P. Amato, A. Palma and G. Bonomo. Many say that with the triumphal chariot the palermitani together with the glory of the saint want to reaffirm the glory of their city once the capital of the world. What is certain is that, especially in recent years, the Chariot is a metaphor of the city’s desire to triumph over its own evils, just as its “Santuzza” did it on the plague.

THE PROCESSION OF Festino Santa Rosalia Palermo 2018
On the 15th, when all the festivities have been concluded – the official ones and those that individual neighborhoods or streets, such as the Panneria al Capo or the Vicolo Brugnò organize every year – is the day of thanksgiving, prayer and invocation addressed to Santa Rosalia. whose relics, contained in the precious silver urn are carried in procession through the streets of the city, starting from the Cathedral. All the Confraternities of Palermo open the procession, followed by religious orders and the Clergy. The precious “vara” is followed, between two wings of the crowd, by the Cardinal and by the city authorities. After traveling through the ancient Cassaro, the procession, at Piazza Marina, is gathered around the Cardinal to listen to the words addressed to the city. Resumed the journey and crossed most of the old historical center, the vara returns, at midnight, in the Cathedral, among the shouts of the confreres who glorify the “Santuzza”.

The procession is accompanied by rhyming devotional songs: